Animal Health Vision (AHV) will host a charity ‘tractor-pull’ with the support of the Grassmen on Saturday, 09 April. All proceeds raised will be donated to Northern Ireland Air Ambulance.

The company has been to the fore in helping to deliver a future for dairy and other livestock farmers that will improve the overall animal health and longevity.

The event will see AHV’s entire Irish team pulling a ‘Grassmen’ Massey Ferguson 3690 tractor from the top of the town in Clogher to the company’s own offices in Augher. The distance involved is two miles.

The tractor-pull starts at 2.00pm. However, AHV staff will commence a ‘spin-a-thon’ earlier that morning, hoping to notch up the equivalent of 500 cycling miles prior to the start of the day’s main attraction.

“Everyone within the company is very aware of the tremendous role that Air Ambulance performs in saving lives right across Northern Ireland throughout the year.

“We are also very conscious of the fact that the service is heavily reliant on support from the public to keep going.

“Given this backdrop, we felt that it would be more than appropriate for AHV to help make a difference on behalf of the Air Ambulance service at this time.

Not surprisingly, the Grassmen’s management team jumped at the opportunity to get involved in the upcoming tractor pull.

“The 3690 tractor that will be used for the event has been totally restored. The AHV tractor-pull will be her first charity event.  The plan is to have the machine looking like an absolute picture on the big day.

“It weights seven tonnes, so the team from AHV will have a real pull on their hands come Saturday 09 April.”

She attended the recent launch of the AHV tractor pull.

Commenting on the vital role that Air Ambulance plays in saving lives, Libby confirmed that it takes £5,500 per day to keep the service going.

“Air Ambulance does receive some support from Stormont. However, the vast bulk of the money it needs comes by way of voluntary contributions from the public and the business sector.”

The management team at AHV hopes to raise £25,000 for Air Ambulance, courtesy of the upcoming tractor run.

“Members of the public can contribute on the day as volunteers will be following the progress of the tractor with Air Ambulance collection boxes.

“Alternatively people can donate courtesy of the gofundme page that has been specifically set up on line.

“We will also be accepting donations from those visiting the AHV stand at the upcoming Balmoral Show.”

People wishing to contribute to the AHV Tractor Run appeal should click on the following link.: gofundme.com/f/ahv-fundraiser-for-air-ambulance-ni

A question for an AHV Farm Advisor?

US – Get in touch 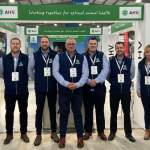 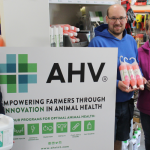 These cookies allow us to build profiles and target groups of our users so that we can tailor the content of our website, such as videos and advertisments, to the user and the content. This recognition takes place at company level. No personal data is collected.

Analytical cookies are used to understand how visitors interact with the website. These cookies help provide information on metrics the number of visitors, bounce rate, traffic source, etc.

With your permission, we place tracking cookies on your computer. We use these cookies to track which pages you visit in order to build a profile of your online behavior. This profile is not linked to your name, address, email address, etc., but only to tailor advertisements to your profile so that they are as relevant to you as possible.