Many farmers are striving for a stable, healthy herd and highly productive cows. A healthy herd contributes to the farmer’s job satisfaction and high yielding cows provide a good yield. The transition period is a tough one forhigh-yielding cows especially.

Twin pregnancy is more common on one dairy farm than on another. The frequency of twins was estimated at around 5.6% in 2012 (Andreau-Vazequez et al, 2012). Twin pregnancy is hereditary but other factors also play an important role in having twins. Elements that may play a role include the  increase in milk yield. With the increase in milk yields over the years, as a result of genetic improvements and animal husbandry, so too as the number of twin pregnancy in dairy cattle.

The effects of twin pregnancy

In the case of twins, the cow generally calve down too early. As with heavy calving, twins require a lot of energy from the cow, which is why it is difficult to maintain a cow’s condition around calving. As a result of the cows weakened immune system it can cause withheld afterbirth. It is therefore important to give the cow extra support during  hardercalving. Livestock farmer Siem de Boer from Warder  commented on how he tackles hard calving

“I administer the AHV Cow Metri Tablet to cows when they have calved down, and especially on cows that have had twins. I do so as a preventative. The cow will then release the afterbirth – in 65-70% of cases after 12 hours.

Curious about the solutions of AHV? Leave your details and an advisor will contact you!

Check out the benefits and customer experiences of AHV’s solutions:

Previous post The importance of drenching during periods of recovery 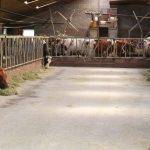 SEND US A MESSAGE

Contact our offices and different departments. Get in Touch

Explore your opportunities to join our world class, purpose-driven team! Careers at ahv

These cookies allow us to build profiles and target groups of our users so that we can tailor the content of our websites and apps, such as videos and advertisements, to the user and the content. This recognition takes place at company level. No personal data is collected.

With your permission, we place tracking cookies on your computer. We use these cookies to track which pages you visit in order to build a profile of your online behavior. This profile is not linked to your name, address, email address, etc., but only to tailor advertisements to your profile so that they are as relevant to you as possible.

Analytical cookies are used to understand how visitors interact with the website. These cookies help provide information on metrics the number of visitors, bounce rate, traffic source, etc.